All you need to know: Orionid meteor shower

When the OSIRIS-REx spacecraft touches asteroid Bennu, it will capture NASA’s first sample from an asteroid and provide rare specimens for research that scientists hope will help them shed light on the many mysteries of our solar system’s formation.

The sample is scheduled for return to Earth in 2023 to be examined and stored in state-of-the-art curation facilities now under construction at Johnson Space Center in Houston. The labs will be managed by NASA’s Astromaterials Research and Exploration Science division, also known as ARES. The division is home to the world’s greatest astromaterials collections — including lunar rocks, solar wind particles, meteorites, and comet samples — and some of the experts who research them. 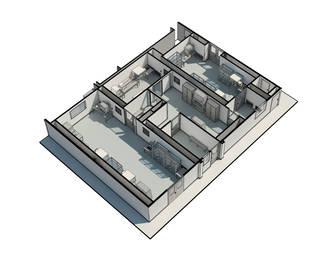 A rendering of the new asteroid lab being built at Johnson Space Center. When the samples are returned to Earth in 2023 they will be brought to this lab for curation and initial examination.

al major insights about the formation and nature of the solar system, asteroids, and other small celestial bodies. In particular, scientists are eager to study the existence of water and organic compounds, such as amino acids in asteroids because such chemicals are known to be involved in many important processes, including the emergence of life on the ancient Earth.

However, in order to learn those scientific secrets, researchers must be careful to properly preserve, protect and handle what they expect will be between 3 ounces and 4.4 pounds (60-2000 g) of the pebbly surface of the asteroid, called regolith. To do so, ARES is developing new curation and research labs, cleaning facilities, tools, and asteroid storage areas that will allow researchers to study the material down to the molecular level without damage.

ARES began planning for the mission more than 15 years ago, and the curation effort is led by Kevin Righter, curator of the Antarctic meteorite collection at Johnson, which includes samples that may be similar to rocks from asteroid Bennu.

“After years of planning, archiving, launch, surveying, and now sampling, I’m a little on the edge of my seat to see what we collect compared to what we expected,” Righter said.

In 2023, OSIRIS-REx will swing by Earth and release the asteroid sample in a capsule that will land in the Utah desert. There, ARES staff will be ready to safeguard the sample and prepare it for delivery to Houston. They’ll do the work inside a temporary clean room set up in a nearby aircraft hangar, just as ARES did after the Stardust comet sample capsule successfully landed in 2006.

Lunning is a scientist working alongside Righter during the initial processing of the asteroid sample.

“I’m really excited to see the sample and interact with it,” Lunning said. “Before it arrives, we’ll be preparing in many ways, such as holding sample return capsule retrieval and disassembly rehearsals to the make sure the actual event goes as smoothly as possible and the sample is protected.”

After landing, the sample will be transported to the new clean rooms at Johnson. There, Righter, Messenger, Lunning, Snead, and other ARES staff will conduct basic initial examinations of the sample to characterize, digitally catalog, prepare, and divide it for study by other researchers.

The first scientists to get a look at the Bennu sample will be a multi-institutional, multi-generational science team from the OSIRIS-REx mission that will study its chemical and mineralogic makeup, among other aspects, to complete the mission’s official scientific goals. After the first mission studies are finished, ARES will archive about 75% of the sample to be used in the future by researchers worldwide.

One international partner receiving a portion of the sample is the Japan Aerospace Exploration Agency, which in return is giving NASA a sample from its Hayabusa2 mission to the asteroid Ryugu. As part of the preparations, NASA is building a separate lab for the Hayabusa2 samples next to the OSIRIS-REx rooms so they can share commonly needed infrastructure, such as air handling systems and nitrogen storage environments. OSIRIS-REx deputy curator Keiko Messenger is also the curator of the Hayabusa2 collection.

The Canadian Space Agency, which contributed the OSIRIS-REx Laser Altimeter (OLA) instrument to the mission, will also be receiving some of the Bennu sample as part of this international partnership.

It’s the small things that matter

Scientists want to study the Bennu sample because the asteroid material won’t be altered by major events or processes that can affect meteorites, such as a fiery trip through our atmosphere or exposure to air or water on the surface of the Earth.  Data from OSIRIS-REx also indicate that the rocks on Bennu are so fragile that they could not reach the Earth’s surface intact.  That means ARES researchers need to develop techniques to carefully extract, handle, and examine the samples in ways that maintain its pristine state.

Snead is an expert on handling astromaterials down to the tiniest microscopic particles. A big part of his job is figuring out how to work with particles less than a millimeter in size so that scientists can learn more about the asteroid’s structure, chemistry, and the forces influencing them.

“The size range is a challenge because when things are that small, gravity is no longer the primary force affecting how they behave,” said Snead. “Instead, electrostatic and intermolecular forces are dominant. For example, if you pick up a particle that is 200 micrometers (about twice the thickness of a human hair) with really fine tweezers and then open the tweezers, the particle probably won’t fall. Instead, it’ll probably stick to one side of the tweezers because of static and molecular forces, so we have to learn how to deal with that.”

Snead’s work also represents NASA’s safety net for the mission. In the event that OSIRIS-REx isn’t able to gather a large sample with its main collector after up to three attempts, the collector also features small metal pads that look like Velcro. Scientists’ tests show that fine grains should be caught in the pads. This material could also provide a sample of the topmost surface of Bennu if sampling goes as planned. Snead is currently developing techniques to cleanly extract the regolith from those pads so researchers are guaranteed to have something from Bennu to study and ensure the mission is an overall success.

For more information on the work of these and other ARES researchers on the OSIRIS-REx mission, visit https://ares.jsc.nasa.gov/missions/osiris-rex/.

For more information on the astromaterials that are curated by ARES at Johnson, visit

And for more information on the OSIRIS-REx mission, visit

2020 Holiday Guide: Get Excited! Experience Up to 40% OFF this Black Hole Friday

2020 Holiday Gift Guide: For the Love of Planets